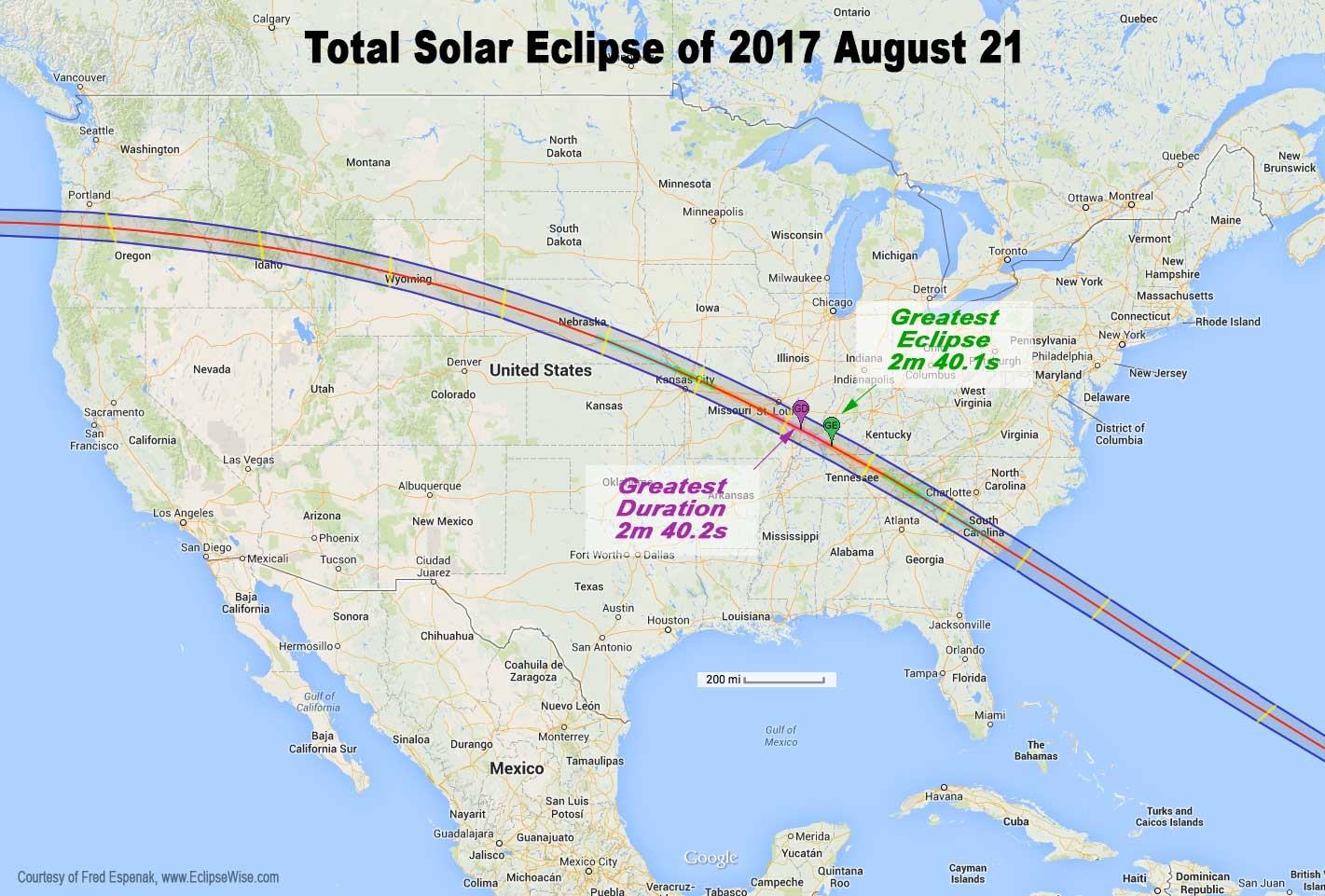 If you happen to be in this 60-70 mile wide path, that crosses southern Illinois, Kentucky, and other parts of the United States, then you will have an opportunity to see one of nature’s most spectacular events – a total solar eclipse.

If you are outside this path, say in Evansville, then you will see only see a partial eclipse.

Unless you are willing to travel long distances around the world, this may be for many a once in a lifetime event.

A total solar eclipse occurs when the Moon passes between the Earth and the Sun, and the Moon casts its shadow on the Earth.

If the centers of the Sun and Moon are perfectly lined up, and you are in the path of the Moon’s shadow, you will see the Moon completely block the solar disk, allowing the outer atmosphere of the Sun, known as the Corona, to become visible, as well as red eruptions on the limb of the Sun known as prominences.

The total duration of the eclipse will be about 2 hours and 55 minutes. Most of that time though will be with the Moon moving slowly across the Sun’s disk and only blocking part of it, which is called the partial phase of the eclipse.

Locally, the partial eclipse will start about 5 minutes before noon, and the eclipse will end by around a quarter to 3 in the afternoon central daylight time. The time varies slightly depending on where you are along the path.

During the partial phase, you will not notice any obvious dimming of the sunshine until about 75% of the Sun’s disk is covered. This will occur about 15 minutes before the eclipse becomes total.

You will start to notice an eerie appearance in the landscape. You will see projections of the eclipse in the shadows of trees.

You will also notice that the temperature is dropping.

5 – 10 minutes before totality, Venus should become visible near the Sun.

2 – 3 minutes before totality, the western sky will darken and shadows becoming very crisp.

1 minute before totality, look for wavy patterns on the ground called shadow bands.

In the last few seconds the thin crescent of the Sun will break up into brilliant bits of sunshine called Bailey’s Beads.

Finally the last bit of sunshine before totality will be silhouetted against the Sun’s corona and have the appearance of a diamond ring in the sky.

The total phase of the eclipse, when the Sun’s disk is completely blocked, will only last 2 minutes and 40 seconds, which is not very long at all.

We are fortunate in that the location along the path that will see the longest duration of total eclipse happens to occur in southern Illinois, and Kentucky.

If you happen to be in Hopkinsville, KY, totality will start at 1:24pm CDT, and last 2 minutes 41.2 seconds.

If you happen to be in Carbondale, IL, totality will start a little earlier, at 1:20pm CDT, and will last 2 minutes 41.6 seconds.

Of course you can travel a few hundred miles east or west of these locations along the path of totality and still receive within 1 or 2 seconds the maximum eclipse duration.

The Moon’s shadow just barely misses St. Louis.  Carbondale looks like a really good spot to be in Southern Illinois.

In Kentucky, Hopkinsville is promoting itself as the best place to be during the eclipse. Hopkinsville lies about dead center in the shadow path.

If you stay in Evansville, you will see the Sun covered by 99%. You will still need eclipse glasses to safely look at it, because even a thin sliver of Sun is still around 100,000 times as bright as a full Moon.

If you are planning on traveling to a location along the eclipse path, such as Hopkinsville, and are planning to make reservations for a motel room on the days surrounding the eclipse, then I am afraid you may already be too late.

People will be coming into the areas along the path of totality from all over the world to see the eclipse, so the traffic could be pretty bad if you need to relocate on eclipse day because of cloudy skies at your primary viewing spot.

It might make sense to make reservations for two locations several hundred miles apart, in case your primary viewing spot is cloudy on eclipse day.

So, how can you safely view the eclipse?

The cheapest way is to get your self some eclipse glasses. These glasses are NOT sunglasses. They are much darker, and block out 99.99% of the Sun’s light.

Another safe and cheap way to view the partial phases is to use pinhole projection. Take a piece of cardboard or box, cut a hole in it, tape a piece of aluminum foil over the hole, and then poke a pinhole in the aluminum foil.

If you hold out the piece of cardboard, and look at its shadow, you will see a projection of the Sun’s disk showing the partially eclipsed Sun.

Before there were safe solar filters, people viewed eclipses through smoked glass. That method does not filter out enough of the light to be safe, and you will damage your eyes, so don’t do it.

Your vision is far too precious to jeopardize with unsafe protection.

Anything with small holes in it, will work similar to the pinhole projector I already described, and make small images of the partial phases on the ground.

If you are lucky enough to have a telescope or binoculars, you can buy safe solar filters that go on the front, and block out more than 99% of the light.

The filters can be made of two different types of material, specially coated Mylar plastic, or a metallized film on glass, which is more expensive.

With these filters on the front of your telescope or binoculars, you will be able to see a magnified view of the eclipse and not only see the silhouetted disk of the moon slowly move across the Sun’s disk, but also see sunspots.

Many years ago they used to sell solar filters that you screwed into the eyepiece end of the telescope. Don’t ever use one of these, they are extremely unsafe.

Because of the way a telescope works, the sunlight entering the front of the telescope gets concentrated at the eyepiece end, so if you have a filter in that location it will rapidly heat up and crack, exposing your eye to direct sunlight, and causing instant blindness. If you have any eyepiece solar filters like this, throw them away!

For more serious solar observers, that want to view the Sun even when it is not eclipsed, you might want to invest in a more expensive solar filter known as an h-alpha solar filter.

This type of filter is much more expensive than the white light solar filters, and it shows things that are not visible in a white light filter, like solar flares, dark filaments, and prominences on the limb of the Sun.

Now I will talk some more about some of the things to look out for when the eclipse gets close to being total.

The first thing you will notice is that even though the Sun is completely covered, it will not be completely dark. The light level will be about what it is like during twilight. You may see a few of the brighter stars and planets in the sky. The reason for this is that even though you are in the moon’s shadow, the shadow is narrow, so things on the horizon will still be in sunlight.

If you are viewing from a high location with a good view of the horizon, like from a mountain, or from an airplane, you might be able to see the Moon’s umbral shadow moving in from the west-northwest just prior to totality.

You will be amazed at how fast this zone of darkness passes over you, as it is moving at nearly 1500 miles per hour.

If you lay out a white sheet on the ground, then just before and after totality, you may briefly see some alternating bands of light and dark moving along the ground. These are known as shadow bands, and are caused by sunlight shining through gaps in the mountains on the limb of the Moon.

If you are looking at the Sun during this time, the sunlight coming through the gaps in the mountains will produce beads of sunlight known as Baily’s Beads.

Another thing you will notice is the drop in temperature. During an eclipse the temperature can drop as much as 10-15 degrees.

With the drop in temperature, the relative humidity increases, and it may cause some wide flat stratus clouds to form in place. Hopefully they are not between you and your view of the Sun.

You may also notice some changes in how animals are behaving.  Birds may act like night is falling and stop chirping, and crickets may slow their rate of chirping due to the drop in temperature.

You will of course also notice a big reaction from the people around you.

A total eclipse can be a pretty emotional experience, and you may hear people cheer, gasp, or even cry at this astounding vision.

Once the Sun is COMPLETELY covered by the Moon’s disk, then it is safe to take your eclipse glasses off, take the filter off your telescope, and look directly at the Sun. Keep those glasses and filter close by however, because, as I mentioned before, the total phase only is going to last 2 minutes and 40 seconds.

The first thing you will notice is the Sun’s extremely hot corona, which can only be seen during a total eclipse. It will appear as a whitish area surrounding the black disk of the Sun, with wispy tendrils, projecting out in all directions from the Sun’s disk. The shape of the tendrils is determined by the Sun’s powerful magnetic field.

The quality of light at this time is amazing, showing rapidly colors known as iridescence, rapid changes in brightness known as scintillation, and delicate colors.

If you are looking through a telescope during totality, you may see some pink tongues of flame jutting out from the edge of the Sun’s disk. These are the solar prominences that usually are only visible with an h-alpha solar filter. These can extend out from the Sun’s disk for thousands of miles.

After way too short a time, the total phase of the eclipse comes to an end, you put your eclipse glasses and solar filters back on, and watch the remaining partial eclipse until the Sun is no longer covered.

Of course eclipses require clear skies. Nothing is as unpredictable as the weather.

Fortunately, clear skies are fairly common during August in Illinois and Kentucky. There is however, always the threat of an afternoon thunderstorm.

The best advice is to be prepared to move if the forecast for your primary observing site calls for cloudy skies on eclipse day.

Sources online for keeping track of what the clouds are doing include the Clear Sky Chart Hourly Predictions, NOAA’s graphical forecast, visible and infrared satellite images from the National Weather Service, and water vapor satellite images.

The water vapor image is important because it will tell you what locations are having lower relative humidity on the day of the eclipse, and less likely to cloud up when the temperature drops during totality.

Finally, here are websites where you can purchase solar eclipse viewing glasses, maps of the eclipse path, and solar filters for telescopes and binoculars.

And here are some of the weather websites you can use for choosing your observing spot.

If weather prevents you from seeing this eclipse, you will get one more chance on April 8, 2024. On that day there will be another total solar eclipse, and this time the path will include Evansville!